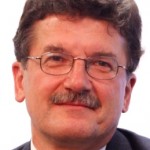 He completed his PhD Food Chemistry/Analytical Chemistry in the  University of Karlsruhe and continued his Post-doctoral studies in chromatography at the University of Pretoria, South Africa.